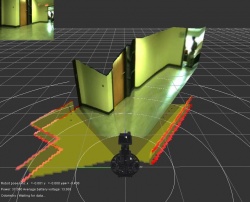 Following the original Telerobot project, we began development on a novel 3D interface for teleoperated navigation tasks. This interface combines, in real time:

With this interface, the user can seamlessly transition from egocentric to exocentric viewpoints by moving the virtual camera around the controlled robot. As in modern 3D third-person videogames, the user is able to set its viewpoint to best suit the task at hand, like a top-down view to navigate tight spaces or a straight-ahead view to communicate with people.

A new, ROS-compatible and open source implementation that will take advantage of modern sensors like the Kinect is currently being worked on.

A few test sequences done in and around the laboratory :